What is a “healthy” IQ? According to neuroscientists, a “healthy IQ” has nothing to do with the traditional intelligence quotient. New research shows that a child’s ability to find success and happiness in life has more to do with their emotional intelligence than school grades and IQ scores. Studies have revealed that some of the smartest kids in school can fail to achieve in life because they are handicapped by their emotions.

In his book Emotional Intelligence – why it matters more than IQ, Dr Daniel Goleman suggests that the real key to a child’s future success lies in his/her ability to be at ease with their environment and to feel at peace and comfortable with who they are. Goleman explains how, in primitive times, the brain was largely directed by the limbic system (the emotional brain). As evolution took place the neocortex (the rational or thinking brain) developed and human beings began to think before they acted. Today, healthy living relies on achieving a balance between both the emotional and the rational brains.

Yoga can help your child to become “emotionally” intelligent. What is emotional intelligence? Put simply, it is found in our ability to be self-aware and diplomatic, manage our anger, empathise with others and to be self-motivated. The practice of yoga, with its philosophical core, strives to improve emotional intelligence by building a sense of empowerment while strengthening both body and mind. Yogic philosophy recognises the dilemmas human beings face when it comes to the emotions. Yoga asanas are designed to create a positive flow of energy throughout.

To understand more about emotional intelligence, we need to take a look at the circuitry of the emotional and rational brains. The part of the limbic system that governs our passions is called the amygdala. It is the amygdala that sets off our internal alarm system when under threat. It does this by activating the body’s flight or fight response (the sympathetic nervous system which signals the body to prepare for action in an emergency). In other words, the amygdala has the ability to trigger raw emotions independent of rational thought; we react before we have time to think. This kind of response shortcuts the usual processes where the neocortex and the limbic system take in information and work, collectively, to determine a response.

Crime is the result of the amygdala’s ability to rule the rational brain. When a criminal acts he/she is reacting from an emotional rather than a rational perspective. Emotional outbursts and irrational behaviour are what Goleman refers to as “emotional hijacking.” This is when we act on impulse, overriding our intellect, creating a shortcut that bypasses the rational brain. So, without the neocortex to keep us in check, our reactions are purely driven by emotion. This explains why human behaviour often seems to defy common sense and rationality.

Goleman explains that the right prefrontal lobes are the seat of negative emotions. In contrast, the left prefrontal lobe acts like a thermostat or “off” switch, for these negative emotions. In other words, it controls our ability to “turn off” distressing feelings. Without this prefrontal control over limbic (emotional) urges our intellectual potential is impeded. Interestingly, the prefrontal cortex is the part of the brain responsible for our “working memory” (this is the term neuroscientists use to describe our ability to hold essential facts in the mind that are needed to help complete any given task). If this circuitry is interrupted by emotional problems it can disturb a child’s ability to learn. I can vouch for this kind of difficulty, personally, as my own intellectual development was hindered by the distress of losing a parent at seven. I found it difficult to concentrate and grew up thinking of myself as “dumb.” Unfortunately, this lack of self-esteem can lead to more emotional disturbances and further difficulties throughout life.

According to neurologist Dr Antonio Damasio of the University of Iowa College of Medicine, patients with an impaired prefrontal-amygdala circuit can have high IQs yet often have trouble making simple decisions. They tend to obsess endlessly and have a tendency to make disastrous life choices. Philip Harden and Robert Pihl support this view, they wrote in their paper Cognitive Function, Cardiovascular Reactivity, and Behaviour in Boys in High Risk of Alcoholism (1995), that children with an above average IQ can still do poorly at school or become disruptive due to impaired frontal cortex functioning. In fact, their studies link criminality, alcoholism and academic failure to a lack of control over emotional life.

Considering the impact of our emotions on our lives, it would seem to be vitality important for a child to learn how to use their emotions intelligently. Goleman says; ‘academic intelligence has little to do with our emotional life.’ He describes emotional intelligence ‘as abilities such as being able to motivate oneself and persist in the face of frustrations; to control impulse and delay gratification; to regulate one’s moods and keep distress from “swamping” the ability to think; to empathise and to hope.’ It would seem that academic intelligence offers us little preparation for the turmoil and difficulties of life, whereas, emotional intelligence does.

According to Goleman, the workings of the amygdala and its interplay with the neocortex are at the heart of our ability to gain emotional intelligence. He explains that the circuitry of the brain is not totally formed at birth, it is shaped and moulded throughout life. In fact, the brain’s key circuitry continues to shape itself. As the habits of emotional management are repeated over and over again new circuitry is formed, creating a tendency towards particular behavioural responses. The good news is that skills that inspire and create emotional intelligence can be developed at anytime; it is never too late.

I'm sure that if we had “emotional intelligence" as a school subject we would be living in a very different society, one with less suicide, depression and crime. Teaching your child to control his/her emotions, in a positive and healthful way, is the most precious gift you can give. Yoga is one way that emotional intelligence can be fostered. How? By showing your child constructive ways to release emotional tension and by helping him/her to develop a sense of emotional strength and wisdom. The movements and breathing techniques used in yoga practice create a sense of personal power; building inner and outer stamina.

There is no magic cure for what ails us. But nevertheless, our physical and emotional wellbeing can be improved by the practice of yoga. The main aims of yogic tradition are “clarity of thought” and “control of emotions.” And, being “comfortable and steady” is the foundation of its philosophy, both physically and emotionally. The following poses are designed to influence the gross and subtle bodies. The asanas outlined below emphasise groundedness, expression and security, qualities that are pivotal to your child’s emotional strength. Yoga will help your child to sooth emotional stress and build emotional stability; achieving the ultimate goal - a healthy and happy IQ.

Most important of all is to use common sense when practising any form of exercise. In essence, one of the main aims of Yoga is to learn to listen to your own body and to become more intuitive with regard to your health, wellbeing and energy level. 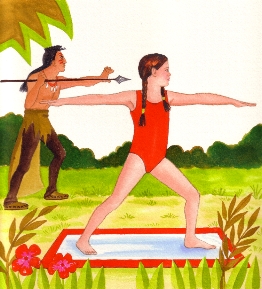 Stand with the feet spread as wide as comfortable {usually just over hip-distance apart) and parallel. Turn the right foot to the side and then lift the left foot and place it down on an angle away from the body. Bend the right knee and make sure that you do not lower the body too much. The knee should not go any further than level with the ankle. You can adjust your stance to be wider, if desired, to create a stronger stretch (but never at the sacrifice of steadiness as this is a grounding pose). Take the arms up and outwards to the sides (palms facing downwards). The arms are held level with the shoulders. Turn the head to look along the right arm, keeping the neck straight. Energise the body. Feel a lifting throughout the spine while stretching the arms outwards through to the fingertips. Consciously lift the crown of the head towards the ceiling. Relax the neck. While in the pose feel the energy and the strength surging throughout the body. Stay in this position breathing deeply for 30 seconds (if possible). Straighten the leg and rise up to a standing position. Lower the arms and come back to the middle and then repeat to the other side. Repeat 3 times.

Benefits: Strengthens and limbers up the legs. Builds the muscles in the back and arms and tones the nervous system. Fights against lethargy. Helps elimination and circulation. Promotes self-confidence and enthusiasm. Inspires courage, vigour and strength.

Chakra: Muladhara (Base of the Spine)—Red
The Root Chakra or Base Chakra (Muladhara) is found at the base of the spine. It represents earth. This chakra governs all that is solid in the body (eg bones and teeth) and is associated with stability, solidarity and having one's feet planted firmly on the ground—feeling grounded and secure. Hence, grounding postures help to relieve anger and fear and give a sense of security, safety, peace and surrender. This chakra is also related to smell, explaining the balancing benefits of aromatherapy. This is the lowest level of vibration in the body. It is connected to the process of elimination and is a vital link to qualities such as strength, focus and courage. Imbalance in this area causes aggressiveness, self-destructiveness, anxiety, self-centredness, and fear.